Istanbul, it is one of the biggest and most touristic cities in Europe. Another fascinating aspect of Istanbul is that connects both Europe and Asia.

We have listed for you the locations of the civilizations in Istanbul which should definitely be seen and visited by everyone.

This place is a little street that located in the Sultanahmet district where historical houses are located. The street which located between Topkapi Palace and the Haghia Sophia Museum, is needed to see with its nostalgic state and its historical structure. Cold Fountain Street, which is one of the unforgettable places of old Turkish films, attracts the attention of tourists who want to take photographs with the characteristic of being closed to traffic and to leave Istanbul with a nice touch.

Neva Shalom Synagogue which is meaning "Oasis of Peace", was built at Buyuk Hendek Caddesi in Beyoglu Kuledibi. Jewish community leader Marsel Franko; The first Karma was organized as a synagogue of the gymnasium of the Jewish elementary school and opened on 26 September 1938 in the religious yearbook of the Jews, "Rosh-Asana". However, due to the lack of necessary legal permissions, the governorship of Istanbul decided to convert the synagogue to its former state in the following period.

When it comes to 1949, the project starts with the necessary legal permission. Among the projects prepared for the synagogue, projects of newly graduated Elio Ventura and Bernard Motola from ITU are accepted and the building will be opened on 25 March 1951 after these long efforts.

The roof of the synagogue is domed. The architectural calculations of this dome were made to the famous Badin and the dome was reverted to the famous master of the papier-mache Garbis Usta. The synagogue's vitrae were drawn at the State Academy of Fine Arts and special glasses were brought from England. Marble floors are made of oniksten.

The Neva Shalom Synagogue was attacked twice on September 6, 1986 and on November 15, 2003, and after the attacks were restored, the worship was opened again. 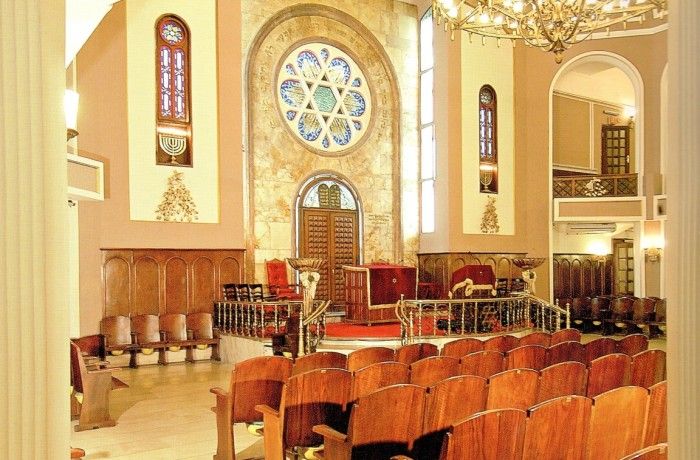