Tophane Square Fountain, built by 1.Mahmut in 1732; In Beyoglu District, Tophane district, Necati Bey and Tophane Pier rise in the middle of the triangular square intersected by the streets. The historical book of the fountain which is the work of the architect Mehmet Aga belongs to the poet Nahifi; The fountain presents an architectural integrity with Kilic Ali Pasha Mosque.

The monumental stance of the building, which was traced back to the baroque style of classical style, helped to become one of the foreground elements among the architectural elements of the space. Among the square planned fountains of Istanbul, the aesthetic harmony of the pointed arched niches used in the Ottoman classical period architecture with its wide valley bearing the baroque traces, has architectural forms that are not seen.

The naturalistic motifs of the Tophane Fountain, which consists of bunches of flowers embroidered in a vase, carry still-life fiction with different lines. The fountain is the work of a transitional period and is one of the most beautiful examples of the period architecture.

After his death, the land of Validebag belongs to the property of the Altunizade family. Altunizade Ismail Zuht Pasha built a magnificent mansion here in the 1860s. After a while, the mansion gives a gift to Sultan Abdulaziz (1861-1876), who is influenced by its beauty. Sultan Abdulaziz demolished the mansion and built the present-day building and gave it to his mother (Pertevniyal) Valide Sultan (died in 1883). The building was given as a summer palace to Adile Sultan (1826-1899) in 1863.

The Qasr of Adile Sultan (Validebag), which has a history of about one hundred and fifty years, is one of the rare structures of today in terms of historical and monumental values. Reachable sources indicate that the building has gained a great deal of day-to-day educational services. This is of special importance to the maintenance. 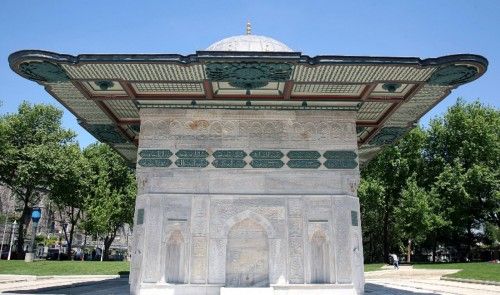